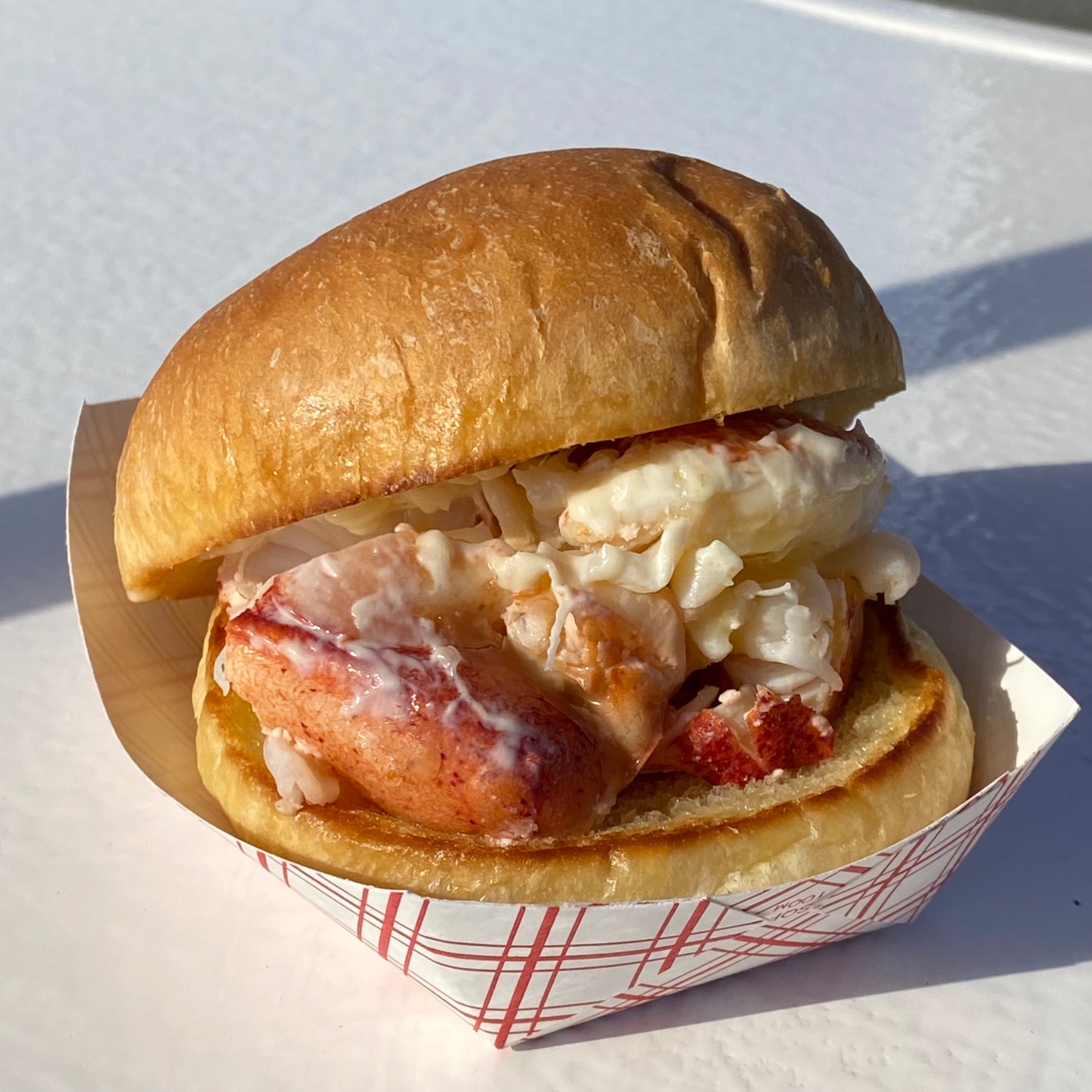 I once ate three lobster rolls in one day. That was a good day. To be honest, I’m not even a big fan of lobster rolls, but my wife thought it would be fun to drive up the Maine coast stopping at seafood shacks as we went. She was right. We started in Kittery and ended in Portland and in the middle was Kennebunkport and The Clam Shack.

That was years ago, but the lobster at The Clam Shack has stuck with me, so when my wife suggested a drive up to Kennebunkport, I was all in. We ate and drank at a couple of other places, Baston River for gin, wings, and fries and The Spirit of Massachusetts for more cocktails. But I knew I wasn’t leaving without trying that lobster roll again.

The Clam Shack is located right on Western Ave, just southwest of the bridge. There is indoor and out door seating and a market. The menu is typical for a clam shack: fish, clams, shrimp, scallops, fries, chowder, and of course lobster. The Clam Shack’s lobster roll is different and you notice it right away. Instead of serving it on a traditional New England split-top hot dog bun, it’s on a hamburger roll. The rolls come from Reilly’s Bakery in Biddeford, ME. It’s not traditional, but it works, and it sure seems like you can get more lobster on a hamburger roll.

You can get it with mayonnaise, the traditional Maine way, cold. You can get it with butter, the traditional Connecticut way, hot. Or you can get it with both, the best way! At the window they actually ask you, “mayo, butter, or both?” Whichever way you choose, you won’t be disappointed. Their lobster roll is generous, and as of last weekend was only $25, an absolute steal for a lobster roll right now. I saw one for $45 a couple of weeks ago. The lobster is pleasant a combination of claw and tail. Like getting butter and mayo, this is the best of both worlds, the sweet tenderness of the claws and the firm, meatiness of the tails.

So I’ve only made two trips to The Clam Shack, but I probably only eat one or two lobster rolls each year so they make up a decent percent. I like Kennebunkport a lot and there is plenty to eat and drink in just a few short blocks, but don’t skip The Clam Shack. A lobster roll and crinkly fries as you watch the people and the cars roll down the street is the perfect way to spend an afternoon this summer. If you do let me know!

One thought on “travel bite: The Clam Shack – Kennebunkport, ME”

The star of this meal is the nut-free garlic scape pesto. But it’s surrounded by cheese tortellini and chicken as well as a simple salad with just lettuce, scallion, and sweet blush wine vinaigrette. Of course it’s served with my go to white wine. Honestly, it’s cheap, it’s a big bottle, and it goes with everything.
Chopped brisket sandwich from Saturday’s nine-hour smoke, topped with apple-kohlrabi slaw with scallion, jalapeño, cilantro, and citrus.
I once at three lobster rolls in a day. That was a good day. This is the lobster roll, I went back to have again. More details on the website.
See that sushi on the left? That is a pickled mackerel with a shallot vinaigrette. It’s my favorite sushi at Karma.
First time having lunch at Nosh by Concord Market. I got the sausage with sauerkraut, dijonnaise, and grilled peppers along with a simple green salad. Others enjoyed the roast turkey club and the chicken caprese wrap. We also played a little pool and shuffle board with my little guy.
It’s been a while since I had a donut this good. The apple donut at Donna’s is so light and airy and the apple cinnamon filling is awesome.
Last weekend I had an amazing dinner at Asta in Boston. Not only was the food, like the ramp risotto and the stuffed quail amazing, but the service was fantastic. It felt like eating in a friend’s kitchen. See more at concordculinary.org or use the link in my Best of Bos highlights.
Did Louis’ Lunch invent the hamburger? The Library of Congress says they did, but when was the last time Congress got something right? It doesn’t matter though because where else are you going to get a burger cooked on a vertical cast iron broiler from 1898? Read more at concordculinary.org
Broke out the smoker for Memorial Day. I did a seven hour applewood smoke on the ribs after slathering them in mustard and adding a heavy coat of rub. I also did a two hour smoke on the bratwurst and chicken thighs. I served it all with a tomato-corn salad.